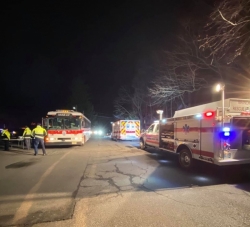 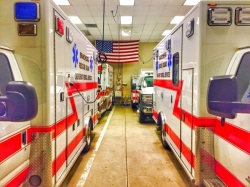 Last night, members of the Branchburg Rescue Squad were requested to standby at our station to provide mutual aid support to surrounding towns as their emergency service volunteers operated at Bound B...
➜
74 Rescue providing Rehab in Raritan Boro 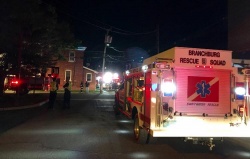 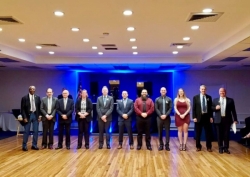 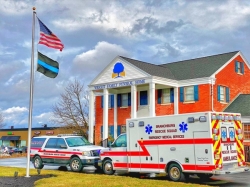 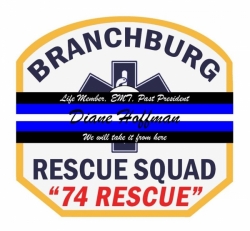 It is with an extremely heavy heart that we announce the passing of one of our life members, Diane Hoffman. Diane has been a member of our organization for 23 years and led us as President for 8 of th...
➜
FF/EMT Taylor Dodge Graduates Navy Recruit Training 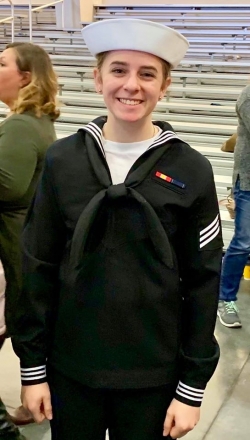 A HUGE congratulations to our very own FF/EMT Taylor Dodge on graduating Navy Recruit Training and becoming a United States Navy Sailor. We’re so proud of you!
History

A VIEW THROUGH THE YEARS

1955 ~ First Ambulance purchased from Whitehouse Rescue Squad, a 1937 model  followed by a 1947 ambulance.  Based out of Nicks Auto Body (now Valero Gas). Incorporated with a name change to “Branchburg Rescue Squad, Inc.”

1989 ~ 2nd addition to building completed, renovating front bays, adding 15 feet to front of building, allowing new vehicles to be able to be housed

2005 ~ Squad celebrated 50 years of Volunteer service to our community

History of the Branchburg Rescue Squad
(As published 1959 Building Dedication)

In October 1954, five men met in one man’s home for the founding of a Rescue Squad.

A 1937 Packard ambulance was purchased for $700 from the Whitehouse Rescue Squad, which is still employed as a “spare rig” for transportation calls made in advance.  To raise the necessary money the fire members signed their names to a note for $700 due the Somerville Trust Company.  The Squad will be ever grateful to the bank for its confidence.

The first payment of $300 on the initial note was made ot the bank in April 1955 which waws part of the first fund drive.  The Packard was paid off in a year after the incorporation papers were signed.

Active operation of the Branchburg Rescue Squad, Inc began in April 1955, after months of preparation.  In December of the same year, a 1947 Cadillac ambulance was bought for $1,500 from the Roselle Fire Dept. Rescue Squad, and again a loan was secured from the Trust Co.

Mr. Olesh unfortunately was forced to resign from the Presidency before completing his second year term.  Frank Norman, Vice President was named to fill out the remaining months of the term.

There began the search fo a lot near the center of the Township which was found on River Rd at the junction of Route 202, which the Squad purchased for $1,000.

To raise money for the Building Fund, the Squad staged scrap drives, an auction, a Donkey Baseball Game, dances and stood by during rodeos at the Silver Saddle Ranch.

During these early formative days both ambulances were sheltered in the private garage of Mr. & Mrs. Utter.  Both of the family cars through their sacrifice were parked out-of-doors in the driveway.

In May of 1955 Squadmen made one of their first apperances at a public event – taking part in the Lions Club sponsored Memorial Day Parade in Neshanic Station.  It was also the first holiday the Rescuers conducted a standby, setting up their equipment on Route 202 to be in a better position to answer calls made in connection with accidents from the heavy traffic.  Now standys are a regular holiday occurrence, rigs being set up on both U.S. Highways 202 and 22.

In December 1956, Frank Norman was elected to the President for 1957.  At this time Mr. Utter was named Building Chairman.  At a subsequent meeting of the Squad that committee termed as “a bit fantastic” informal bids from $27,000 to $35,000 from contractors who were asked for quotations on the buildings construction.  The Squad by securing the time and effort of its members can do it for $15,000, the committee figured.

In September 1956, a $16,000 mortgage was secured from the Somerville Trust Company, trustees fo the Squad putting their “John Hancocks” to the loan.  The building committee at this time was given stronger powers tot act, and the membership offered to construct as much of the building as possible themselves.

During 1956 the Squad was honored by winning the Fifth District plaque.  This was given for having the most men present at the first aid seminars conducted by the organization which comprises Rescue Squads throughout the district – which includes .

This site has been viewed 884,536 times.
Calls
News
Events
Pictures
Apparatus
Maintained by the members and staff of Branchburg Rescue Squad Inc.. Designated trademarks and brands are the property of their respective owners. Copyright © 2006-2022. YourFirstDue Inc. All Rights Reserved. Content on this web site is supplied by Branchburg Rescue Squad Inc.. YourFirstDue Inc. cannot be held responsible or liable for any content, text, pictures, or any other media found on this web site.
Management login
Powered by